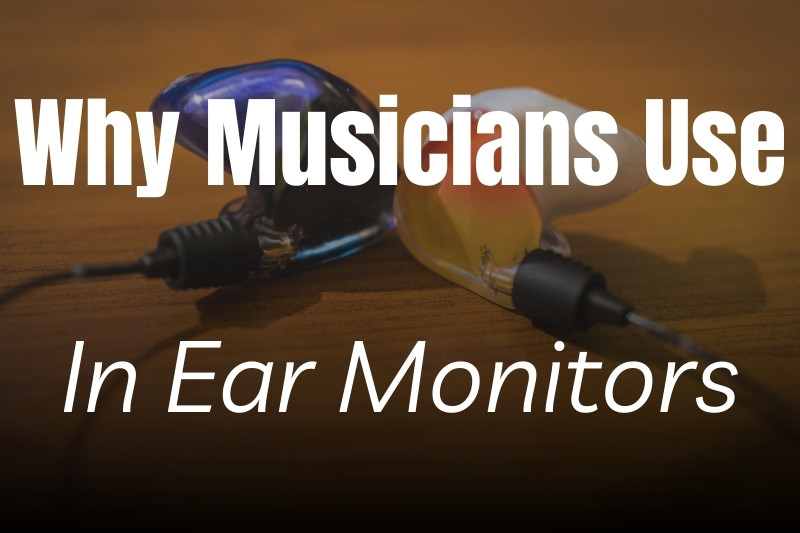 It isn’t just the lead singer wearing an ear piece during a live show these days. In fact, it’s very common for the rest of the band to use an in ear monitoring system as well. There are a few reasons that a musician will choose to wear an IEM. So, let’s take a look at some of those reasons and answer the question, “Why do musicians wear earpieces?”

A singer or other musician will often wear an in ear monitor, or earpiece, to protect their ears and their hearing as well as improve the quality of their sound on stage. An in ear monitor, or IEM, can isolate specific parts of the band as well and provide protection from loud sounds during a show.

In ear monitoring systems range from very affordable to extremely expensive. There are some models that get quite good ratings and run under $30 for a set. Then, there are custom fit, very high end models that go for thousands of dollars. It really just depends on what each musician needs and can afford.

Let’s dive into what IEM systems actually do and the benefits they provide.

Why do singers wear earpieces during a live performance?

We may be a lot more used to seeing singers wearing in ear monitors than the rest of the band. It’s fairly common to see your favorite singer reach up to their ear and adjust something, as if they were receiving some special communication from their CIA team.

The reality is that singers have a harder time hearing certain parts of the band, including their own voice, if the mix and the venue isn’t exactly right. And even then it can be a challenge.

Since a sound engineer, or the singers themselves, can adjust the sound levels being received by the IEMs, they can make it a lot easier for that vocalist to hear everything the band is doing and to stay on pitch. Often, the bass and drums during a live show can overwhelm what a singer hears. So, being able to adjust those levels can help a lot.

Also, since a singer is often more up front on stage, they may be receiving a lot more of the sound that’s put out depending on where the stage monitors and speakers are set up.

And, if a singer is doing a solo gig, it’s pretty common for them to stream their backing tracks directly into their in ear monitors to alleviate problems with background noise, outside noises, and other different sounds that they can’t control.

Using wireless systems during a live concert or other loud environments

In a live band, it’s often very hard to control your surrounding environment. Going from venue to venue can be really tough on a band who struggles to get some consistency in their sound. Each room sounds different, and every PA system does too.

So, being able to control your sound as much as possible makes it easier to deliver a consistent experience as a band.

Even if a band uses the same space every show, such as a church worship band or house band at a club, there are quite a few variables that can throw off a singer or band member at the wrong time.

It’s good to note that not all IEM systems are wireless. Some plug directly into an audio interface. However, wireless systems are very popular as they allow musicians to roam the stage as much as they’d like.

And, again, IEM systems also provide great protection against an excessive volume level. Being consistently exposed to really loud sound levels can be dangerous to hearing.

Having said all of this, there is another huge benefit to using an in ear monitor system and that’s a much quieter stage. If you’re using IEMs to monitor your band’s own performance, you don’t need wedge monitors on stage.

Often, you don’t even need the speaker or PA system on stage the way you would have in the past since your instruments can go direct into a soundboard and through a venue’s main sound system. That leads to a sparse, cleaner, sometimes safer stage setup.

By moving the floor monitors and other audio equipment off stage, you also leave more room for the performers to actually perform and interact with the audience.

Who uses a wireless IEM system

If a band is big, and lucky, enough to have their own audio engineers with them at all times, then often the engineers are the ones who will control a lot of what happens in the IEM system. Each band member will obviously have their own preferences, but the sound engineer might take over and make sure the band sounds as good as possible from the front of the house as well.

A good sound engineer will know just how the band likes to hear their direct source of sound, and they can also head up any technical issues that arise as well. This leaves the band free to focus entirely on their music.

As mentioned, these days it’s a lot more common to see everyone in the band wearing in ear monitors, including the drummers. How each musician uses them, however, is often a very personal thing. They can tailor what they hear exactly how they like it.

It also depends on what you play and what you’re more likely to hear during the course of a show. A bass player is going to hear much more low-end and will want to lock in with the drums. But, if they’re also able to hear the higher-end of the band, they can make musical decisions that they might not be able to without the IEMs.

Since bass is such a “hybrid” musical thing, not solely rhythm but not solely harmony or melody either, this is a really good example of where an IEM system would be a benefit. Being able to hear as much of the band as possible is a huge bonus.

How drummers use IEMs

Drummers use in ear monitors a lot more these days than they did in the past. One common use is to play a click track through their earpiece to help them stay in time, especially as they’re still learning new songs. Session players and drummers new to a tour frequently do this.

Also, because a drummer is often buried towards the back of the stage, it can be harder to hear everything else going on. They may want to lock in with the bass player, and that’s easier to do at times. But, if they want to react with other band members, such as a guitarist, keyboard player, and even the singer, it’s a lot harder to do unless they can hear the mix really well.

How In Ear Monitors work

IEMs sit in the ear canal and basically act as an earplug to reduce outside noise by many decibels. This way, a musician is hearing their own mix almost entirely. And, since the mix of an IEM can be specialized for each musician in the band, they hear exactly what they want to hear.

Most consumer facing in ear monitors come with several different tips that allow you to find as close to a perfect fit as possible. These days, memory foam tips are becoming more and more popular as well. These provide really high levels of isolation and are super comfortable.

There are also very high-end models that are custom fit to each person’s specific ear canal. First, a mold is taken of the ear canal with foam, and then the mold is sent off to the factory to have the custom IEMs created. These are obviously the best sounding and most comfortable models you can buy.

From here, the monitors simply plug into either an audio interface or a separate receiver depending on if the IEMs are wireless or not.

Another one of the main reasons that musicians use in ear monitors is to cut down on loud noise and protect their hearing. It was all too common for musicians at the end of a long music career to come away with some level of permanent damage to their ears.

But in recent years, affordable and available IEM systems have helped to protect a musician’s ear and allow them to give their best performance much later into their lives.

Ambient noise can really play havoc with a good band mix. On stage, external sounds, a bad sound system, and even your own music can throw a band off and make it hard to find their way back.

Using an IEM system that isolates the band’s sound from the rest of the world can help them to focus on their actual performance. Good in ear monitoring systems can provide crystal clear quality regardless of the size of the room.

It provides an environment where not only does the audience benefit, but so does the band.

IEMs in the recording studio

We’re working on another writeup of the use of IEMs in the studio, but we wanted to tease that a little here.

There is some debate over the use of in ear monitors during recording, mixing, and mastering. This is usually because as engineers in a recording environment, we want the sound levels to be as flat as possible. And, many lower cost IEM systems these days do provide some kind of boost, whether at the lower end or higher end.

After lots of research, we’ve found several models that are great for use in the recording studio. This is especially true if you’re only using them part of the time. In combination with studio monitors and normal headphones, IEMs can be a great tool to add to your toolbox.

Thanks to the development and advancement of in ear monitoring systems over the past few years, the days of going home with headaches and ringing in your ears may be over. The hearing protection that these systems provide along with the amazing musical clarity make them a no brainer.

There are even models now that can dial in a bit of the ambient crowd noise so you can still feel, and hear, the excitement of the crowd.

If you’re thinking of trying IEMs in your live band or home recording situation, go for it! The technology and affordability makes them a truly awesome tool.

Let us know if you have a favorite brand or model of IEM in the comments below.

2 thoughts on “Why Do Musicians Wear Earpieces: Guide to In Ear Monitors”