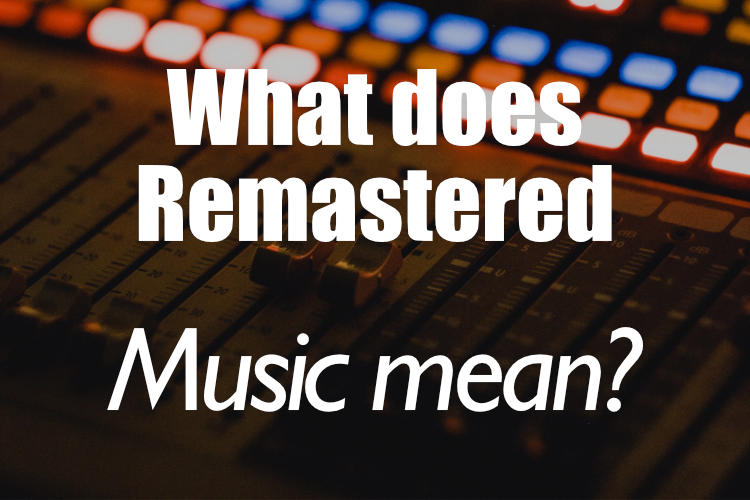 Remastered music has gone through a process of digitally altering older or poor-quality recordings. The goal is to improve the audio quality and optimize the music for modern listening devices and platforms. Remastered music is made clearer, smoother, and easier to listen to.

Original recordings are sometimes lower in quality or not up to modern music standards. So, they may need to be remastered. But, is this process worthwhile? Does remastered music sound better than original recordings? Let’s find out!

What does “remastered music” mean?

The term remastered is often seen on track titles, especially on modern music streaming platforms. But, what does this term actually mean?

The term remastered is used when an older or poor-quality recording is improved digitally by enhancing the audio, removing any unwanted sounds and frequencies, and bringing the recording up to modern standards.

Modern remastering not only converts analog music into digital, but it improves old digital recordings as well. Remastering improves the audio quality of a poor recording or the quality of a recording that was made using older, less refined recording techniques.

The difference between an original and a remastered song should be clearly apparent when comparing the two.

How are remastered and original music different from each other?

The difference between remastered and original recordings becomes apparent when the two tracks are compared closely with one another. This is especially true with very old recordings that have been remastered.

Remastered music is usually free of the pops, crackles, clicks, fuzz, and noise that is present in old recordings. Part of the remastering process is removing these recording anomalies. Remastered songs are typically clear and well-balanced. However, older recordings can be less clear and sometimes harder to listen to.

The process of remastering a song is not as simple as making the audio sound clearer than the original recording. The process completely revamps the audio of the track, making it sound more like a new recording of the song than an edit of a pre-existing recording.

The listening devices in use when older songs were recorded weren’t as high-quality as many listening devices are now. So, when an old song is played through a modern device, many of the imperfections, unwanted noises, and discrepancies can be clearly heard. This isn’t ideal for the listening experience.

For this reason, most older recordings are remastered for modern devices and platforms to improve the audio quality to modern standards.

How are songs remastered?

The remastering process varies a lot depending on several factors with each song or track.
For instance:

In general, once a track is in a digital format, remastering follows a standard process. It usually includes compression, balancing, and limiting, among other things. Afterward, the engineer will make further adjustments and alterations based on the specific song and the way it sounds.

The engineer will try to correct problems such as audio imbalance, level discrepancies, and distortions. By using modern digital techniques and software, these recordings can be given new life for new listeners.

Once this is achieved, the engineer can then make other alterations or fixes that are required. Modern recording software allows the engineer to remove specific unwanted frequencies and sounds. This can range from background noise in the studio or live venue to frequencies produced by low-quality recording gear.

If an entire album is being remastered, the engineer will also take time to be sure that the songs flow well from one to the next, creating a cohesive feel across the entire album.

Once the audio is processed, it is then exported into the desired digital audio format for listening.

Remastering a song is complicated and requires skill and special tools. But, do the songs really sound different after the process is complete?

How clearly the differences can be heard entirely depends on the original quality of the song. Very old recordings from analog mediums such as tape or vinyl can sound very different when remastered.

Recordings from long ago are often full of crackles, rustles, crinkles, pops, hisses, and fuzz. Remastering these tracks will remove these unwanted sounds and reveal the sound of the song that’s been obscured.

Poor quality or poorly mastered songs will sound choppy, unbalanced, uneven, and exhibit discrepancies in volume and clarity throughout the song. Remastering a song like this will even out the audio, improve clarity, and make the song easier to listen to.

That being said, there are remastered songs that only went through the process of being converted to a different digital format. Songs in MP3 format may be very high quality. But, they must be remastered when converted to MP4 for certain devices. In this instance, there is little difference in audio quality between the two tracks.

However, in many instances, the remastered version of the track sounds drastically different from the original.

If the process of remastering is so complicated, and there may not be a real difference in some instances, is remastering worthwhile? Is remastered music better?

The answer to this question is very subjective. Some listeners prefer the organic tone of original scratchy recordings, while others prefer crisp, modern-sounding remasters.

In most cases, the purpose of remastering music is to improve it, not change it. Remastering is intended to breathe new life into old recordings and bring them up to the standard that modern music lovers expect.

This process is intended to make beloved recordings even better and never to detract from them.

Remastering improves on old recording techniques and fixes problems that were impossible to eliminate when the original recording was done. Good remastering can even take a badly mixed song and improve it to radio quality, making it sound significantly better.

In the opinion of many listeners, remastered music is often better. However, there are some audiophiles who prefer the pure sound of original recordings. They prefer them even with the original squeaks, pops, and noise along the way.

The character that comes along with the older recording techniques is often such a part of these older recordings that removing them can make a classic song sound sterile and bland. So, it’s up to the engineer to artfully remaster without removing the soul of the song.

Some argue that the original recording is the way the artist intended the music to be. Even though the original audio may not be high quality by today’s standards, it does capture the tone and feel of the time it was recorded. This is important to many music lovers.

Modern equipment and techniques are capable of incredible recordings. However, older recordings do hold a certain charm that simply can’t be replicated today.

Music lovers who prefer original recordings are happy so long as the music is audible and would prefer to not have the song remastered unless it is exported to another listening format.

Why remaster a song?

If there are those who make the argument that older or original recordings are better than remastered tracks, why remaster a song or an album at all?

The main purpose of remastering isn’t to alter the feel of the song or its overall sound and tone.

Remastering music is never intended to remove the original charm or feel of a piece of music. The purpose of remastering is simply to improve the quality of the recording. That, and to make it available in other formats.

Older recordings made with analog technology must be transferred to a digital format. If not, they will never be heard by the majority of listeners. Vinyl has definitely made a small comeback. However, most people still don’t own or use record or tape players. So, for this music to be heard and enjoyed, it must be remastered and formatted digitally.

If remastering is done well by a technician who understands what they’re doing, a remastered song is only improved.

Are there any drawbacks to remastering?

Remastering music is not a perfect process. There are, unfortunately, some possible downsides to remastering music, and many songs have been remastered poorly.

Remastering music is subject to the skill, experience, and tools of the engineer that is doing the remastering. If the music is not remastered well, it may decrease in quality and listenability rather than increase. Some songs are remastered with the intention of sounding good on poor-quality listening devices, but this detracts from the overall sound of the music.

If a song is remastered for playback on low-quality devices, it will not sound good on high-quality devices. The inverse is also true. It’s impossible to remaster a song to sound good on every platform and every device. This leads engineers to try and find a middle ground, which is not the optimum quality of sound for any device.

Also, if an engineer isn’t careful, they can remove some of the incredible ambiances of an original recording. This is sometimes why people say vinyl sounds so “warm” among other things. The surrounding noises and colors go into the feel of the song. Removing those can definitely harm the track.

This is what leads many to prefer original recordings. The originals may not sound as perfect and polished as modern recordings, but the quality is unaltered across most devices.

Music is remastered with the intention of bringing it up to modern music standards. This brings older recordings into the modern age and allows them to be enjoyed across all modern music platforms and listening devices.

A good engineer is an artist as well. It takes a music lover’s ear to remaster music well. It also takes someone who loves and values the history of music to be true to the original recording.