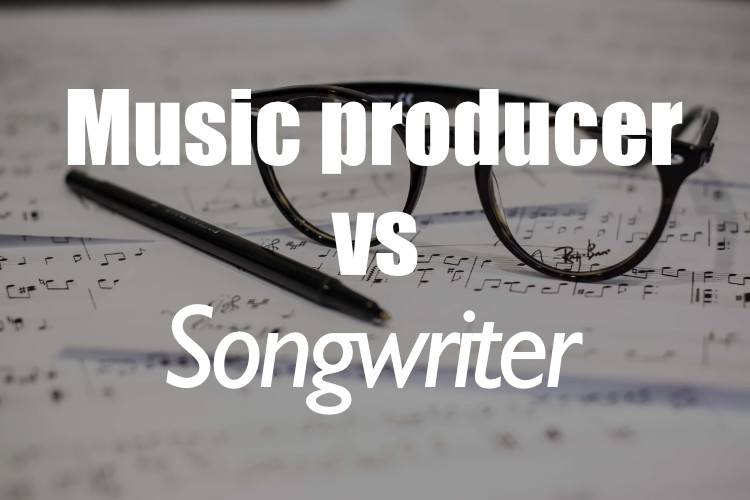 If you’re interested in music, whether you’re wanting to become a singer, songwriter, composer, or producer, it can be helpful to clarify each of these roles. The songwriter vs producer debate is not easy to settle. This is mainly because these roles have changed so much in recent years.

So, if you’re asking yourself, “What on earth is the difference between a songwriter and a producer?” we can help clarify that a bit. But remember, the line between these two titles has blurred a lot. We’ll take a look at why as well.

Traditionally, songwriters have been responsible for the idea and initial creation of a song. They write the lyrics and arrange the musical composition. The producer usually takes over from there and is responsible for deciding how the song will be recorded, engineered, and even who will perform it.

And, having said that, let’s take a look at where the job titles can get blurry during the creation of a song today.

What does a songwriter do?

A songwriter is not necessarily a singer or a producer; however, they can be both, or even all three. A songwriter will usually come up with the music as well as the lyrics for a particular song. And, sometimes, they may only write the lyrics. If someone is writing only lyrics, they’re usually referred to as a lyricist.

Since there are often musicians who specialize in one aspect of songwriting, many songs are composed by a team rather than a single person. You should start to figure out what part of songwriting you love most and hone your skills there.

What qualifications do I need as a songwriter?

You don’t necessarily need a degree to become a songwriter. However, to work in the industry, it’s helpful to have related work experience. You also need to have a good understanding of your role and that of other members involved in a project.

Often, a degree in music composition, production, or performance can help with getting your foot in the door as a songwriter. What people will really want to hear, however, is what you can create. So, if you want to write music, start learning and writing music.

So, we know what a songwriter is and what they do. But, let’s flesh it out even more and show you the particulars involved in being a songwriter.

What does a music producer do?

The term “music producer” has changed and morphed so much over the past several years. In fact, it doesn’t really match what it used to mean even a decade ago.

Today, if you’re following what music producers do on YouTube and other social media spaces, you’ll notice that it often includes creating music from the very beginning. So, in a sense, these artists are both songwriters and music producers.

There’s definitely still room in today’s music industry for producers who want to fit in the older mold of music production. Lots of producers today take existing songs and bring them through the recording process all the way to mastering. This looks a lot more like a recording engineer, and it can be loads of fun…as well as financially rewarding if you’re good.

What qualifications do I need as a music producer?

Music producers are technically and organizationally minded. However, they also have to have a flair for creativity. They need to have keen hearing and a great understanding of the specific recording technologies which they and their team will employ. They also need to have an excellent grasp of music in general. On top of all this, they also need to know how to lead people and manage projects.

Music producers are often the captain of a musical project. They’ll direct, and they’ll support their team all the way through to the project’s completion.

There are many degree and certificate programs for music production, and getting a degree can help you get a job. But, just like with songwriting, what you can actually do in the studio (or on a laptop) is often what will get you hired.

As we can see, producers have to wear many hats. This is why it can be tricky to distinguish exactly what makes someone a producer. A producer can be involved in the actual creation of the music, whether they’re editing tracks or working as a member of the band.

Here are a few areas where a music producer will most certainly be involved:

They might. But, their core purpose is more of a director in that they steer the project on its proper course. The producer is the one who works with all the various components that go into taking a song or score from its inception to completion.

They may well write the lyrics to a song, but to what degree they are involved will depend on the project and the other members of the team who are involved.

Years ago, they would most likely not have received the label of songwriter, regardless of how involved they might have been in the process. This has taken a slight turn in more recent years, and we’ll see why that is in a moment.

But historically, some music producers have become as well known for their sound as the bands they worked with. Phil Spector, Brian Eno, Steve Lillywhite, Rick Rubin, Brian Wilson, Quincy Jones, and George Martin are all great examples of producers who influenced the sound of the bands they worked with. The great thing about them is that they also allowed the musicians to be themselves, for the most part.

Who gets songwriting credits?

Today, we need to consider the difference between Songwriting Copyright and Sound Recording Copyright. In the past, the producer would have received a percentage of the royalties for the music. However, they would usually only receive a small percentage if they weren’t given songwriting credits.

This has changed over the years, particularly because producers found that they weren’t making enough from the recording copyright alone. So, they’ve come to the table with a more hands-on approach to the initial creative phase of a song’s inception.

Producers have a greater grasp of the creative aspects of song and score development and sometimes even write songs. They may collaborate with the songwriter and the singer to create the product in a more holistic sense. They may make recommendations on lyrics, the song’s structure and might even advise on alterations that could be made to the chords and melodies.

If they’re then given co-writer rights for the song, they’ll retain a portion of that copyright, and the revenue, for years to come.

What’s the difference between a music producer and a composer?

Music composers usually stick to the actual scoring and composition of the music in question. They need to know their way around score preparation, analysis, orchestration, and music notation. Composers work not only to create music purely for listening purposes but they may be involved with creating the scores for films and games.

Composers must have an ear for music and understand how different instruments complement one another. They have a keen grasp of how the various musical components interact and how to weave them into the final composition and tell a story.

It’s a lot more common for music composers to study a traditional course of music composition at the university level.

Sometimes a music producer’s job includes making sure that the music partners well with a particular visual medium, such as in a music video, a movie, or a game. So, they may work very closely with a composer on a project to get everything just right.

Although they can be seen as filling a similar role as a film producer, where they are responsible for organizational elements, music producers also have good knowledge of the actual music creation process. They understand the ins and outs of DAWs and how to use visual editing software, as well.

So, they’ll usually be seen as the more technical role when they partner with a composer on a project.

Songwriter vs Producer: The Conclusion

It’s clear now that a songwriter may well be a producer and vice versa. This may not always be the case, though. So, it’s a good idea to be able to make the distinction, especially when it comes to who holds the specific copyrights in question.

A songwriter is anyone who puts pen to paper (or fingers to keyboard) and actually writes a song, along with its notations and words if there are any. They are usually the brainchild of a project, and they’ll then likely take their concept or demo recording to a producer. The producer will turn the initial idea into a pristine final product for the listener to enjoy.

Now that you have a better understanding of the songwriter vs producer debate, you can make informed decisions about what you may want to specialize in. Find the path that excites you most, and create some music!