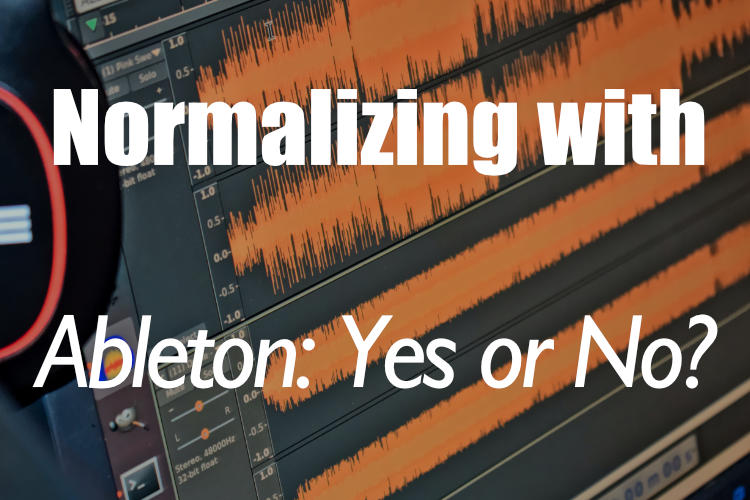 Normalization is a process that has a bit of history in the recording industry. But, it’s one that not a lot of musicians and producers really know the details about. It’s often unclear what normalization is and whether you should be doing it in the first place. Let’s take a look at what the process of normalizing music is, and then you might be able to answer the question, “should you normalize in Ableton?”

Normalizing in Ableton will take the highest point in an audio track or file and raise or lower it to a standard threshold, often 0 dB. This will raise or lower the entire level of the audio track as a whole, without affecting dynamics. Tracks with spikes in loudness can be helped by normalization.

As we can see, there are elements to consider when deciding to normalize or not. It isn’t necessary to normalize every audio track that you’re working with. Some tracks that fall well below clipping points and still leave headroom for mixing into the overall song probably won’t need normalization. Especially if the audio is already fairly stable and consistent in terms of levels.

Should You Normalize On Ableton?

So, if that’s the case, when DO we normalize audio in Ableton?

When we normalize an audio track, the process alters the levels of the audio within that track and ensures that it’s done in an equal and consistent way. Generally, as mentioned, Ableton will alter your track to bring the loudest spots to 0 dB. This will be the “loudest” level typically accepted when you want to bounce your track.

Remember that when you mix all of your tracks together, they will “add up” in overall level. And, if you go too high at certain points, you’ll start clipping. This is common when you have kick drums hitting at the same time that you have loud, screamy vocals and driving guitars. If you have vocal tracks where the singer is hitting very high levels at certain parts of the song, this might be a great option for normalizing.

Also, if your recordings aren’t up to par, whether you’re recording guitar or anything else, normalizing can help to even out spikes or bring up levels that are too low. Just remember that when you raise levels altogether, you’ll raise the volume on everything, including noise from low-end equipment and anything a mic picks up.

So, normalization doesn’t alter the dynamic range within your track. If you have some high peaks and spikes within your track, you’ll still have them after normalizing. If you want to “even out” your audio you’ll want to either use a compressor or a limiter.

Sometimes, you might want to use a compressor that will bring the whole track, or song, to an average level, which will affect the dynamic range of the whole piece. Compression is a very common tool in mixing. You will use compression much more often than you will normalization.

A limiter, on the other hand, will act as a stop-gap at the top of a range and keep your signal from going over that “limit.” A limiter most likely won’t affect your dynamic range either. It will literally cut off any signal going over the top limit that you set. It’s an easier, but much more blunt force, tool to use. Use limiters sparingly, and only towards the very end of your mixing process.

Here are a few reasons why it would be advisable not to normalize:

What Does Normalizing On Ableton Do?

The question isn’t really whether we should be normalizing in Ableton specifically, or what happens when we normalize in Ableton, but instead whether it’s something we should do in general. Some DAWs may cause the normalized track to sound different, but there shouldn’t be a large noticeable difference.

When we think of normalizing, we should think of it as being synonymous with moving a fader. The signal in its entirety is altered by a fixed amount, whether up or down. The only difference here is that the program is doing the job for you by scanning the signal and locating the loudest peak, then making adjustments to the rest of the audio.

The Pros And Cons Of Normalizing On Ableton

Normalizing ensures that a specific maximum volume for the bounced track can be achieved without exceeding your chosen threshold. This means that the final audio file will have optimal levels for whichever format you want to bounce to. This doesn’t, however, mean that the perceived loudness of one track will necessarily match that of another. Also, there may ultimately be clipping in the final product if you aren’t careful. You still have to think in terms of your song as a whole.

Most importantly, normalizing will not affect the dynamic range of your track. This means that the difference between the loudest and softest parts of your track will be altered uniformly and not in isolation. The overall dynamic range will remain the same.

You’re also free to utilize other aspects of your DAW, such as processors, limiters, and compressors, to alter the samples separately.

Normalizing doesn’t ensure that the loudest peak of each track will be the same. This is because the way we perceive loudness depends on other factors, such as the duration and frequency of the sound as well as its overall intensity. So, although having the peak levels adjusted to the same dB level is essential, it doesn’t mean the track’s loudness will match up to the others in the mix.

The normalization of a track will push the peaks up or down, but the perceived loudness is sometimes unrelated to the peaks, especially on the general level of the track.

Normalizing is not a magical fix-all. You can’t simply insert your various samples and then expect normalization to do the work for you. You will need to put in the work as far as mixing is concerned if you want good final results.

As mentioned, normalizing does not, by itself, prevent clipping. This is especially true if you intend to add effects before the final mastering of your track.

Is Normalizing The Same As Compression

Sometimes people get confused between normalizing and compression. However, there is a distinct difference between the two. With normalization, you’ll end up with a track with the loudest peaks sitting at 0 dB, or some other level that you choose. This will then ensure that all of your tracks are sitting at the same relative volume.

Compression, on the other hand, “squashes” the audio waveform using a set ratio, lowering your peaks and raising your lows so that your track has a more consistent volume. After that, you can increase the loudness of the track and have the highest peak sitting at 0 dB. The compression process will alter your dynamic range.

We aren’t suggesting that normalizing doesn’t have its uses. On the contrary, there are times when normalizing can, in fact, be very helpful. But, you do need to consider its use on a case-by-case basis.

Look for those moments in your recordings where there are standout peaks that could use a little leveling off in relation to the entire track. If your track is already pretty consistent in terms of levels, you probably don’t need any normalization there.

Don’t discard the idea of using normalization, but rather, be selective and genuinely consider whether it would be to the track’s advantage to use it.