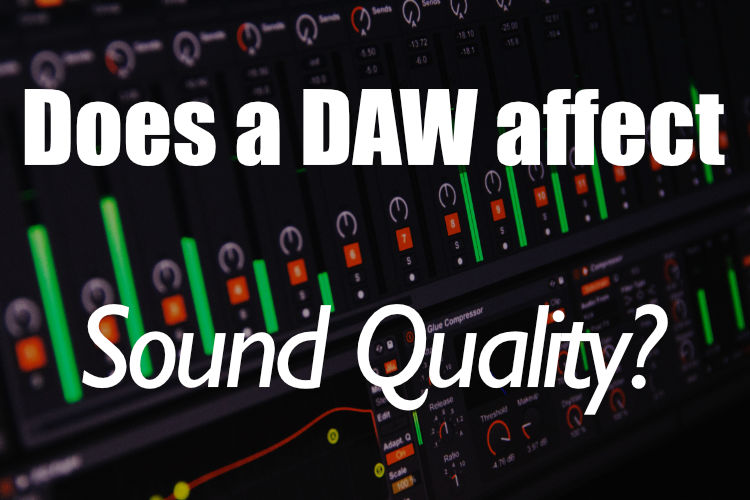 Not all DAWs are made equally and the one you choose to use will generally be determined by your budget or perhaps just personal preference. However when it comes to recording and mixing your music, you want to go with the best possible option, but this begs the question: Does your DAW affect the sound quality?

DAWs can theoretically affect the quality of sound, but under most listening conditions, there is little variation. The difference comes in when you are adding effects and processing the recording. If you are just doing straight-up recording then the difference will be attributed to your hardware.

Now although this may seem cut and dry, it may not be as simple as a basic yes or no answer. This question has led to extensive debates and various music producers will swear by certain DAWs whilst vehemently protesting that others either give out too much bass or treble or even leaving the music sounding flat. So let us take a look at some sound advice that follows.

Does The DAW You Use Affect The Sound Quality?

When you have completed your track and it is time to bounce it, you want that final product to be as crisp and clean as possible. Two key factors that we can analyze to determine differentiation between DAWs is the volume and frequency output. Volume being how loud the final product is and frequency looking at what sound tones are predominant. We can also determine the quality of the sound by how flat the response is to the original input.

Ideally, your DAW should not alter the original source’s volume of the base, middle, or treble. However, this may not always be the case and the type of compression you use, whether it is stock or plug-in, will ultimately cause some alteration. In order to determine whether there are differences, you would need to utilize an audio analyzer to gauge this objectively. Another way to measure the sound quality would be to listen to the song and critically study it.

If you were to do these tests though, you would ultimately come to the conclusion that although there may be statistical differences, the ultimate sound output from varying DAWs is very much the same. You would also discover that the variables in question do not convey a great enough difference to say that the DAW you use will affect the overall sound quality.

To say that one sounds better than another is an incredibly subjective matter and as we have seen, there is little to support the argument that one DAW is able to create better sound than one of its counterparts. Keeping this in mind though, people still believe that certain programs are better than others. It is possible to conceive that in earlier days, different DAWs did have a variation in their outputs, but nowadays that no longer seems to be the case. It would appear that other factors such as brand reputation and preferred interfaces are the more likely reasons that people believe one DAW creates better sound than others.

It may, however, be that not enough in-depth studies on the matter have been done to yield satisfactory answers. For instance if one were to test other components of each DAW then perhaps we may find a way of ranking them.

One area though where one DAW may yield better results than others is in the adding of effects and processing done to your recording. Not all programs come kitted out with the same elaborate and high-quality effect generators and their abilities to mix audio, so if your raw audio requires a lot of processing and tweaking then perhaps it would be ideal for you to invest in a more high-end DAW.

We have established that generally speaking, the quality of the sound should not differ from one DAW to another, but do they generate music that sounds indistinguishable? There are a number of prominent producers who would argue that yes, indeed there is a difference in the final product, depending on the DAW used.

There is, however, a snag here and that is that if the DAW is set to flat then there should not ultimately be any difference. Once you start adding effects and mixing your tracks then that is when the differences tend to arise. This is because different DAWs are inclined to manipulate tracks in diverse ways.

How To Choose A DAW.

When it comes to choosing which DAW will best suit your needs, there are, thankfully not very many factors to consider.

Firstly, your budget will determine which one you opt for. How much you have to spend or are willing to spend, is probably going to be your primary consideration. Below is a table of a few DAWs and their approximate, respective pricing:

Once you have taken a look at what works for you price-wise, you will want to consider features and workflow. Some DAWs have more user-friendly interfaces and are easier to navigate. It is thus a good idea to first try out the free/demo version (which most companies do offer) and see which one appeals to you the most.

Which Are Some Of The Most Popular DAWs On The Market Today?

Their popularity is the consequence of an array of reasoning, but amidst those motives are: Usability, workflow, interface layout, plug-ins available, pricing and (perceived) quality.

So, at the end of the day, there really is little evidence to prove that one DAW is ‘better’ than another. It all simply comes down to personal preference and other factors, like budget, when making your selection of a workstation.

If you are looking for an industry-level DAW with more built-in features and which will also allow you to transfer work from your workstation to another then it would be advisable to get something like Ableton or Logic, however, Pro Tools, Cubase, and Nuendo are popular choices, too. If you are just looking to dabble in music production and do not have a large budget, then free versions such as Audacity, GarageBand, Protools First, and Ohm Studio are great options.