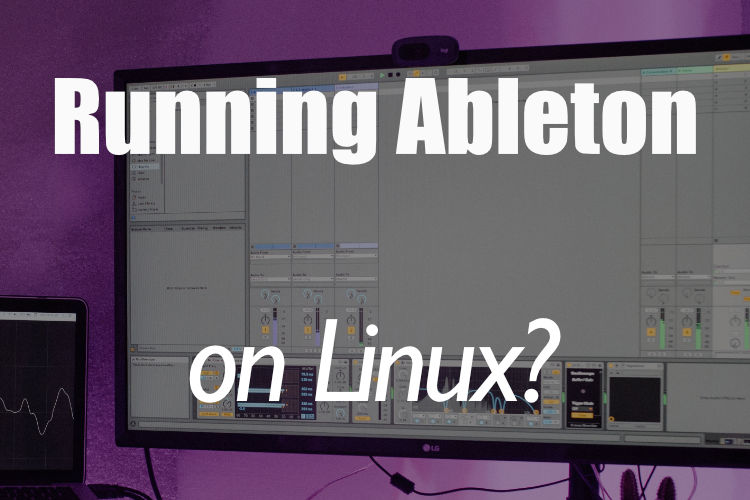 Ableton is a widely used digital audio workstation used by thousands of musicians and producers all over the world. This program has become a standard in the industry, but it is very expensive to buy, and the free version is very limited. Is there an alternative? Can you run Ableton on Linux?

You can run Ableton on Linux, but it is very challenging. Setting up Ableton on Linux is time-consuming and requires understanding how to set these programs up correctly. Ableton can be used on Linux with much effort, and but there are alternatives that are designed for use in Linux.

Ableton is a requirement for many recording musicians and producers. Still, the hardware, software, and budget required to run Ableton on standard operating systems can be a challenge to acquire. Let’s take a closer look into the alternative: does Ableton run well on Linux? Let’s find out!

Can You Run Ableton On Linux?

Ableton is a staple in the music industry, especially among those who create their own tracks digitally. There is simply nothing like Ableton for producing and generating tracks, but the hardware and software that are required to run this program can be very costly and out of reach for many.

One possible alternative may be to run Ableton on Linux. Linux is a free operating system that is very versatile and capable of running almost anything if you are willing to deal with a much less user-friendly interface.

You can run Ableton on Linux, but there are some potential problems that may come along with it. Linux can be difficult to use, but if you do manage to get Ableton up and running on Linux, it has the potential to run even better than it does on Windows or Mac OS because Linux is such a simple operating system.

Does Ableton Run Well On Linux?

Linux is a unique operating system that is favored by many for its simplicity, customizability, and the fact that it is free to use. However, Linux is not as prevalent as Windows or Mac OS, which means that there is less support or Linux regarding programs such as digital audio workstations (DAWs)

The fact that Linux is not designed to run programs like Ableton and that Linux does not support every program designed for Windows or Mac OS has led many to wonder if Ableton will run well on Linux if it does work at all?

Ableton will run well on Linux, provided you have a very capable computer to run it on.

User reports state that running Ableton on Linux with anything less than a powerful computer with at least 32g of ram is simply not feasible.

This is mainly because Ableton is so large, but also because the program must be altered to run in Linux, and it must be run through a proxy system called WINE to function at all, which adds another layer of complexity to using Ableton on Linux.

Provided that Ableton is installed and set up correctly, with sufficient hardware to run it, Ableton can run well on Linux. But it does take some know-how to set up and configure to run smoothly.

Are There Any Advantages To Running Ableton On Linux?

Linux is unlike the operating systems that most people are used to, such as Windows or Mac OS. This means that there may be some hidden advantages that not everyone is aware of when using a program such as Ableton on Linux.

These characteristics shine through into using programs such as Ableton as well. There are numerous plug-ins and add-ons that are only available for Ableton on Linux, while all of the add-ons and plug-ins for the other operating systems are also available on Linux.

This means that running Ableton on Linux may offer sounds and features that are not available anywhere else.

Suppose you are willing to go through the inconvenience of setting up Ableton and getting it working properly on Linux, and provided that you have the correct computer for running the program. In this case, you may achieve and produce tracks and beats that are not possible anywhere else.

That being said, achieving this is much more difficult than it is on the more mainstream operating systems.

Are There Any Alternatives To Ableton For Linux?

Ableton is a must-have program for many musicians. There are few DAWs that are more trusted or more used than Ableton. Unfortunately, Ableton is very expensive to run, and the hardware and software required to run it are even more expensive.

This is why so many musicians and producers attempt to run Ableton on Linux, but this process is difficult, and without the exact right hardware and the understanding of how to set it up correctly, Ableton on Linux fails for many users.

This leads many musicians to seek out an alternative digital audio workstation to use on Linux. Is there such a thing? Are there alternative DAWs that can be used in Linux without causing headaches?

Fortunately, due to the open-source nature of Linux, there are several alternative DAWs that are designed to run smoothly in Linux.

The most popular among these programs include:

There are several other options available for use on Linux, but none come closer to Ableton than Bitwig Studio. This is the best alternative option for Linux.

It is possible to run Ableton on Linux. Still, it is not as simple as using it on other operating systems.

To run Ableton on Linux requires a good understanding of how to set up a program in Linux, how to use Linux overall, a powerful computer, and a lot of fo time to set up the DAW correctly in Linux.

If you are not familiar with using the Linux operating system or converting Windows or IOS programs to Linux, it is better to use an alternative such as Bitwig Studio.

If you have the time, the patience, and the know-how, Ableton can be installed, set up, and run well on Linux, but it is a challenge to get right, and it will take some trial error.