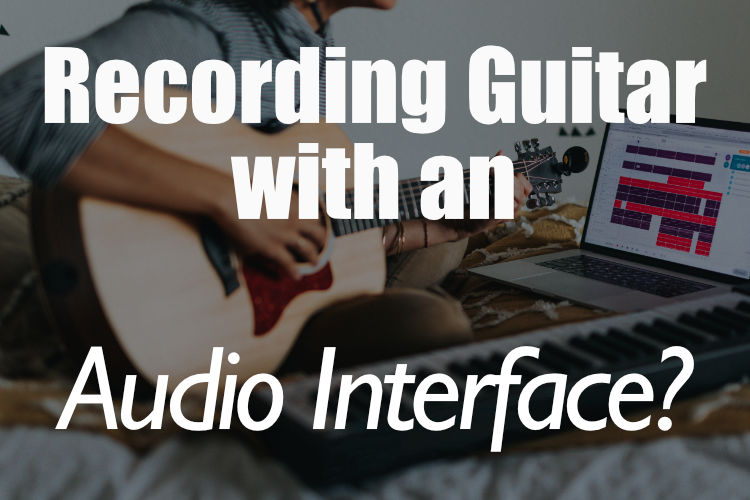 Recording is an important aspect of playing the guitar. Recording allows the guitarist to hear what they sound like, explore creative realms of songwriting, and find areas of their sound and technique that could be improved. However, what if you don’t have an audio interface? Can you record guitar without an audio interface?

Can You Record Guitar Without An Audio Interface?

Recording guitar is an essential part of the experience of playing the instrument. Recording allows the player to experience their music outside of themselves, and this opens a new world of creative possibilities. It can help the guitarist to improve their playing by highlighting areas for improvement.

However, the process of recording a guitar can be complicated, and many say that sophisticated equipment is required to do it.

Whether or not you need to use an interface for your recording really depends on what you will be using the recordings for, if you are recording just for fun, to try it out, to help yourself remember ideas, or to hear yourself play, then an audio interface is not necessary, as the audio quality in these circumstances is not an issue.

However, if you are seriously recording music to be released, an interface may be essential to capture the quality that is required for releasing music by today’s industry standards.

That being said, there have been some amazing recordings made using nothing more than very simple hardware and no interface at all.

If you have a computer, a decent recording program, or DAW (Digital Audio Workstation) such as Logik, Qubase, or Ableton Live, you can record guitar without an audio interface.

Let’s go over some of the possible ways to record guitar without using an audio interface:

Recording guitar without an audio interface can be done. Still, it will take ingenuity, practice, patience, and a lot of musical and production skills.

If you don’t have an audio interface for recording, you will still need to have a computer with a DAW installed onto it to capture, process, edit, mix and master your recordings. Without a recording program, it is not possible to record guitar on a computer.

Provided you have a good DAW installed, here are some of the ways to record guitar without an audio interface that may work extremely well if you put in the time and effort to use them well:

Use A USB Microphone

This is the best way to record guitar without using an audio interface.

An interface is required for good-quality guitar recordings because the interface amplifies the guitars’ signal to a level that the computer can use well. Without this, the audio level is very soft.

Using a microphone plugged directly into your computers’ USB port will get around this problem.

This will work for both acoustic and electric guitars. Simply plug the mic into the computer, identify it in the recording software that you are using for the recording, and play the guitar either acoustically or through an amplifier in the room.

Plug You Guitar Into The Computers’ Line-In

An electric guitar or an acoustic guitar equipped with an onboard pickup can be recorded by plugging the instrument directly into the computer via the 3mm input, provided the computer has one.

For this to work, you will need an adapter from your instrument cable to 3mm jack in order to plug it into the computer.

This method will work, but an audio signal that the computer will receive from the guitar will be very soft, and it will need to be digitally boosted in the DAW that you are using for it to be a useable audio for a recording.

Use The Computers’ Built-In Microphone

The last method on this list of ways to record guitar without an interface is to simply use the onboard microphone on your computer.

This method is unlikely to produce a high-quality or clear recording, depending on the quality of the microphone in your computer, but it will work to capture some audio if you use it well.

For this method to work well, the room should be as quiet as possible, and the computer should be relatively close to the audio source, either the guitar itself or the guitars’ amplifier.

The computer should not be too close; otherwise, it will result in very unclear audio. Keeping the microphone about arm’s length away from the audio source is a good idea.

Make sure that the room that you are recording in is quiet and does not echo too much, and this method will provide you with a basic recording that can be digitally improved to an extent within recording software.

It is possible to record guitar without using an audio interface, but the recording quality will leave something to be desired.

Guitar recordings that are made without an audio interface may be of poor quality and clarity, but it can be done, and the resultant audio can be very useable if you record it well using the methods that are available to you.

Take your time, experiment with the recording tools that you have at your disposal, use a good recording program, and you should be able to achieve a decent guitar recording.