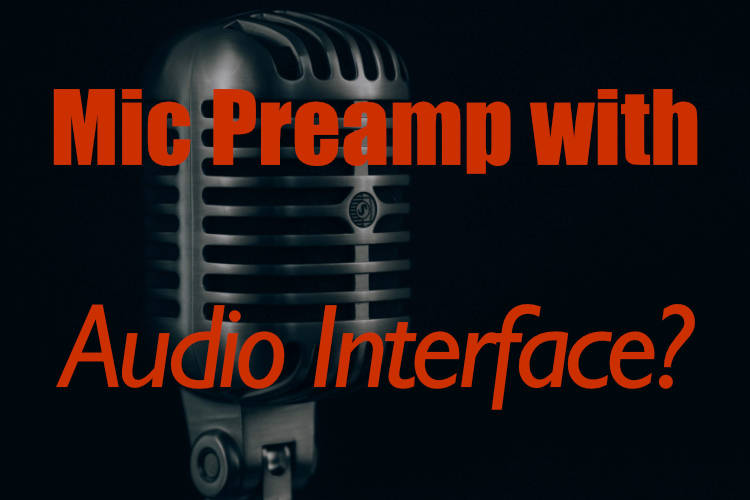 Recording professional audio is easier now than ever, and you only need a couple of pieces of equipment to get the job done. However, many new recording enthusiasts don’t understand what a preamp is, how it works, and if they need one if they’re using an audio interface.

You won’t need a preamp if you’re using an audio interface. Audio interfaces (and all equipment with a mic input) will have a preamp built-in. Just know that preamps for various audio interfaces will differ, and you’re able to use external preamps to alter the audio’s characteristics if you wish.

Do I need a mic preamp with an audio interface?

The short answer is no; you do not. This is because your audio interface will come with a built-in preamp. Pretty much any piece of audio equipment that has a form of a mic input will have some type of preamp available to it.

This is because, without a preamp, you would not be able to use a microphone (as we will discover in the next section).

One thing to note is that you may decide to use another preamp besides the one built into your audio interface because various preamps do offer to change the quality, color, and characteristics of the audio. As we will find out, this is because depending on how they are designed and what components make them up, they will change the sound in various ways.

In order to understand better why you would need a preamplifier, whether it is built into your audio interface or as a stand-alone device, let’s first quickly detail what a preamplifier is and what it is used for.

A preamp is a specialized type of amplifier that is specifically designed to take weak audio signals and boost them (make them louder) without introducing too much noise or distortion into the signal.

You get many different types of preamps, and besides having ones that you can purchase as stand-alone devices, there are typically built-in versions that come in most pieces of audio equipment that allow you to plug a mic into them.

This means that built-in preamps can be found not only in audio interfaces but pretty much any audio device that has a mic input, and this can include a mixing desk and even the mic input on your Mac or PC.

To better grasp why indeed preamps really do matter, we need to understand how microphones work.

Mics are technically transducers. Transducers take one form of energy (in our case, sound waves) and converts that energy into electrical energy. A microphone achieves this by relying on a process called electromagnetic induction.

Without going into too much detail on electromagnetic conduction, we just need to know that sound waves push against the diaphragm of a mic, causing it to vibrate, and as such, that vibration induces a small electric current.

It will help if we understand that the current a microphone produces from the process of electromagnetic induction is very small, only being measured in millivolts.

Now, pieces of audio equipment such as mixing desks and audio interfaces are not designed to use such small amounts of current.

This is where preamps come in. As we said, a preamp boosts a low-level signal, and with it being intentionally designed to do so, it is a requirement and must be placed in the audio chain after a microphone; otherwise, the mic won’t work.

Hence a preamp really does matter because even though you may not think you are using a preamp because you have not got a stand-alone version of one, you are because your audio equipment will have them built-in otherwise, using a mic would not be possible.

Do mic preamps make a difference?

Mic preamps do make subtle changes to the audio depending on the design and components of the preamp. They can either boost the signal in a “clean” or “colored” way because of this.

The internal components of a preamp can use tubes or transistors, and even these components will affect the quality and color of the sound. Newer, more modern preamplifiers use transistors, and you will typically find these in preamps that are built into your mixing desk or audio interface.

Transistors produce a clearer and crisp sound, while preamps built with tubes have a more “warm” and “thicker” sound.

This means depending on what type of sound you want to record, you would use a different preamp because they can make a big difference in the sound “color.” And, of course, your recording environment can alter your microphone recordings too. This is one reason that producers sometimes use microphone isolation shields.

Take note that one type (transistor and tubes) is not better than the other they are different, and depending on your taste and style; you may choose one over the other for a specific recording.

Do you need a mic preamp for all mics?

Dynamic microphones will always need a preamp to drive them because they do not have any electronics within them that can boost their signal. This does not mean that they are bad or never used. The SHURE SM 58 is one of the world’s most popular dynamic mics, being used for almost all professional live performances, and has even been used in the studio to record.

Please take note, though, that a condenser microphone will require phantom power for it to work correctly, and it is still able to be used with pieces of audio equipment that already have a built-in preamp, such as an audio interface or mixing desk.

The only thing to consider is that because a condenser microphone has a built-in preamp, it is very sensitive; it picks up nuances in the sound. This means you will probably need to set the gain of your device where the condenser is mic is plugged into lower.

We discovered that, in fact, you do not need a preamp for a mic if you have an audio interface. This is because all audio interfaces and pretty much any piece of audio equipment that has a mic input will have some type of preamp available (built-in) to it.

You would opt to purchase and use another preamp because preamps in their design are made to change the audio quality and characteristics of the sound. Hence, if you are looking for warm vocals, you may want to use a preamp built with tubes. Conversely, if you are looking for clean, crisp vocals with nice highs, you may want to try a modern preamp made with transistors.

In any event, the preamp that comes built into your audio interface is more than capable of producing good quality audio, and as such, you will not need another preamp for your mic if you have an audio interface.