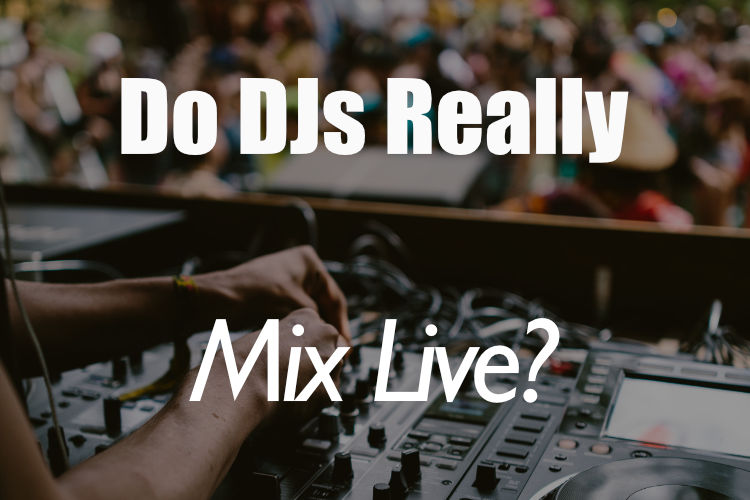 While not all EDM DJs mix live, most try to when possible. Most DJs have pre-prepared setlists that they play, mixing between tracks in creative ways. Performances also include adding effects and reacting to the crowd. While few DJs create entirely new songs live, new musical experiences are common.

There are many misconceptions about the live performances of dance music DJs. These musicians are unlike any others, and the way they perform is unique as well. Whether or not EDM DJs mix live is often determined by where the DJ is performing as well as their musical background.

Sometimes, EDM DJs can appear to be simply dancing around on stage as part of a performance rather than actually doing anything to affect the sound of the music they’re playing. When a DJ is pressing buttons and turning dials, are they mixing live, or is this all for the show?

Most EDM DJs are actually affecting their music when they’re turning dials and pressing buttons on stage. Modern DJs have powerful tools available to them, and most know how to use them well. Many DJs are still true to what they do. And, many DJs prefer to have control over what’s being played rather than just faking it on stage.

Very few DJs create entirely new tracks live. But, almost all DJs perform some form of equalizing, mixing, monitoring, leveling, or balancing during a live performance. As mentioned, many DJs also add or change effects live as they go, rather than simply using the preset effects on their tracks.

There’s a real art to what a DJ does when it’s done well. It takes years of practice to mix tracks, add effects, and play to a live crowd. Properly executing this skill is super important for how well the audience responds to the performance and how well the show goes.

What do live DJs actually do?

The live performance of a DJ entails more than most people realize. Professional DJs who take their work seriously don’t simply press play and dance on stage. They are very involved in the flow of the music, how the music sounds, and how the tracks are portrayed to the audience.

Creating a mood with music

One of the most important things a good DJ will do is read a crowd and create the perfect mood for that crowd at that specific time.

A good DJ can create any number of moods with the exact same playlist. A sunset show in a downtown high-rise loft should sound and feel completely different from a sunny afternoon poolside show. A DJ with serious skills can use filters, effects, and a lot more to create an atmosphere with a list of tracks as raw material.

The skills required to properly execute a performance like this require excellent practical knowledge of the equipment that the DJ uses and a good understanding of mixing, equalizing, mastering, monitoring, blending, and the ability to do all of this on the fly.

A DJ has to be an incredible lover of music above all.

The DJ must seamlessly blend the two tracks to create an effective mix and transition between songs and sounds seamlessly. This takes a lot of skill and musical awareness to execute well in a live performance setting.

Do EDM DJs fake it?

Unfortunately, some do. This practice is somewhat rare, but it definitely does happen.

A fake performance by a DJ is usually the result of necessity rather than choice. Faking a performance usually happens when hardware malfunctions without a backup or when software develops issues that can’t be rectified before a performance.

In these cases, EDM DJs have been known to use pre-made performance tracks that simply play on their own, and the performance that the audience sees from the DJ is entirely inconsequential to the music.

There are some DJs that intentionally fake it on stage, at weddings, or at parties. Sometimes, an aspiring DJ might just get themselves into a gig that’s a bit over their head. One way to deliver a performance is to deliver one that they don’t create live. Not ideal by any stretch, but it does happen.

More often than not, DJs try to perform live rather than fake their shows, but fakers are not unheard of in the industry.

Unless the DJ is faking their performance, as we’ve just learned can happen, EDM DJs don’t just press play. EDM performances do often consist of pre-prepared lists of tracks. However, the DJ has full control over the setlist, the tracks, the effects, and how the tracks blend together.

A good DJ can also change the setlist if they think a specific song will hit well with the crowd they’re playing to. They shouldn’t be locked into a list of songs. And many good DJs today are actually music producers and songwriters.

A live EDM performance requires a lot of skill, perfect timing, knowledge of the equipment used, and most importantly, the musical understanding to combine the various elements of the performance into one cohesive musical experience.

EDM DJs do mix live, but they don’t normally create new songs live. What they do create live is an experience, which is an art form in itself.

The DJ must mix the tracks together by matching the tempo, pitch, and effects of each track as they blend together. The goal is to create a seamless musical experience that matches the mood of the event and the crowd.

This requires immense skill and musical knowledge, as well as an excellent understanding of the equipment that is used on stage.

It’s rare for EDM DJs to fake their live performances, but it does happen. This is usually due to equipment or faults, but there are some DJs who fake it on purpose.

For the most part, EDM DJs are skilled musical performers who deserve as much respect as other musicians, often simply for their musicality and stage presence.