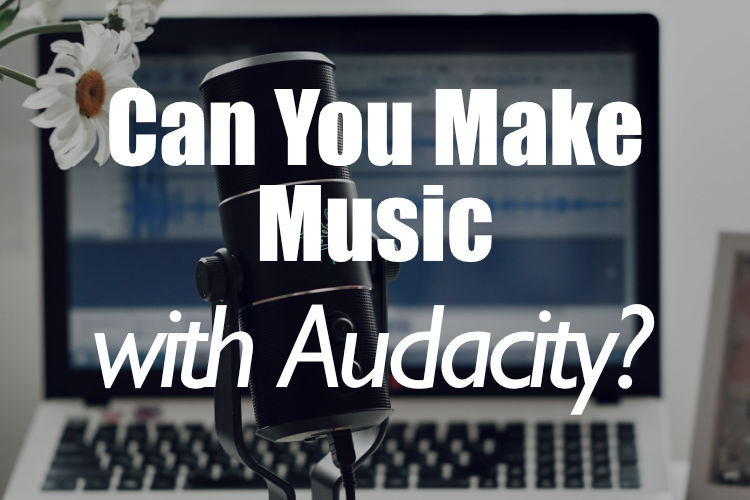 When choosing a DAW (Digital Audio Workstation) there are some key factors to consider and one of the main ones, apart from the budget, is the program’s functionality. So you are a musician or aspiring producer and you’re asking yourself, “Will Audacity enable me to make music?”

Audacity can be utilized to do two things well, recording and basic editing. However, if you want to modulate or process sound then you may be better off with a different program. However, it does not mean Audacity is incapable of doing such things; there are people who use it for these purposes.

You have asked the question and we have the sound answers for you. We can make music using Audacity, but to what degree? Also, we need to look at the functions that it has to offer and how we can best employ them to help us to potentially create sonic masterpieces.

How To Make Music With Audacity

If you are just starting out you may not have any other microphones apart from the built-in one on your device (if you’re using a laptop; a desktop is unlikely to have any). So it would be a good idea to invest in acquiring microphones and recording interfaces.

Thankfully recording in Audacity is as simple as selecting your preferred microphone and then pressing the record button on the top left side. You can also choose whether you wish to record in mono or stereo.

Be sure to check your levels before starting to record as you do not want either your vocals or instruments to cause clipping. If you do see that you are having clipping issues, simply lower the recording volume.

Multi-track recording is also possible with Audacity, given that you have a recording interface that allows you to do so. Otherwise, you can simply record each individually and then edit as needed thereafter. To add another track, all you need to do is go to ‘Tracks’ and select ‘Add New’ and choose which type of track you want.

Many people utilize Audacity to create music without recording anything themselves. To do this all you have to do is import the tracks or sound clips you wish to use and then start editing them together as you see fit.

You can also generate things such as chirps, plucks, and rhythm tracks from the virtual instruments available; however, the one drawback about Audacity is that it does not have a MIDI function and there is not a great variety of options available to you. You are therefore very limited in what you can add to your music from the program.

It does however offer a range of built-in effects which may come in handy; things such as fade-ins and outs, you can tweak the bass and treble levels of tracks, there is a built-in compressor, reverb and echoes can be created and it even has a graphic EQ, although not as sophisticated as those found in some other programs.

Editing and mixing your music

Once you have either recorded or imported tracks into Audacity, you will need to mix and edit the tracks accordingly. There may be ambient noise that you will need to remove or you may desire to play with the timing, tempo, and speed of certain tracks.

Something else that you will need to consider, especially to avoid your final product from clipping, is regulating the volume of each specific track. You can do this by looking at the two sliders adjacent to each track (on the left); the top one will allow you to meter the gain. Below this is an option (to the left or right) to pan the track; play around with both of these sliders to see how it makes your overall product sound.

Regardless of whether you recorded or imported, you will likely need to cut, or even delete certain sections of the audio. You can do this by simply selecting the portion in question and hitting backspace.

Once you are happy with the placement of your different audio pieces and your song is taking form, you may wish to add some effects. As mentioned before there is a variety to choose from and you might want to experiment with them before making your final decision. Be aware that adding certain effects may cause your track’s volume to increase.

A good practice to consider is duplicating your track, which you would like to edit first, mute the one and then apply the effects to the second track. This way, if you make adjustments which you are not happy with, you can always delete the track and simply start afresh.

To save your files

If you wish to save your project to work on it later, all you need to do is go to ‘File’ and then scroll down to ‘Save Project’. This will save the file in a format which will allow you to open it again in Audacity and continue where you left off. Once you are satisfied with your song and wish to bounce it, go to ‘File’ and then select ‘Export’. You are then free to choose in what playable format you would like to have it save. The most common file types being MP3 and WAV.

How Do You Make Beats With Audacity?

At face value, one can immediately see that Audacity is the bare bones of audio editing software, but even so, it is possible to create beats using it. It is not ideal though and there is an array of reasons as to why this is, the main one being that there are much better-equipped programs available to do this.

However, if you are cash-strapped, a complete beginner, or simply do not wish to learn a new program, then the following Youtube video will definitely come in handy. In order to make beats with Audacity, though, you need to have a sound knowledge of beat creation, especially in terms of where certain instruments sit as far as pitch and frequency are concerned.

This is because with the ‘instrument’ selection, it does not indicate high top, kick, snare, and so on. Instead, all you are given are the options of Pluck, Rhythm Track, and Risset Drum; you can also generate Chirps, and Tones as well which you will then have to edit as you desire.

For a more in-depth run down, on how to make beats, using Audacity, go and peruse this Youtube video.

Is Audacity Good For Mixing Music?

Audacity is a completely free (great bonus) to use software and although not an industry-level program, it is pretty versatile and user-friendly considering that you aren’t paying a dime for it. In theory, All DAWs are essentially the same in terms of base functions. They are used for recording, editing, mixing, and producing music or soundtracks.

The downside to Audacity though, is that it has a very limited interface and basic mixing capabilities. Its built-in digital instruments are also not ideal for making music and the general lack of MIDI capabilities means that your final product may be deficient unless you have actual instruments which you can record and then mix and edit.

Do Professionals Use Audacity?

Audacity offers quite a broad scope in terms of its capabilities and is great for basic and beginner level use, but is it sophisticated enough for the pros? Although people may not realize this, DAWs are generally quite specific in their uses; some are better for mixing; others for live recording; and some are for more general use. Although you can likely do the same things with most of them, people will select a DAW based on their personal needs.

Now when it comes to Audacity, it is great for beginners and those who do not have the cash to fork out for the high-end programs, but a professional music producer is highly unlikely to use it. The general industry standard would be something like Pro Tools or Ableton.

Does Audacity Actually Qualify As Being A DAW?

Audacity is in theory a multi-track DAW, which can be used for recording and mixing music; that much we have been able to establish. As it is an open-source DAW, the user interface is rather basic, especially when compared to other DAWs available, however, it does include many features which are useful to one wanting to create music: It is able to import and export an array of different file formats, has built-in effects and it supports VST (Virtual Studio Technology) plug-ins. This is something that not all other free software allows for.

It is an exceptionally useful tool that can be used in isolation or with other platforms; has editing facilities; allows you to manipulate levels and includes batch processing. So, although it may lack all the frills of some other DAWs such as Pro Tools, it is still substantial enough to constitute the title of being a DAW. This is strictly because it does have the ability to record, edit and produce music and other audio files; it must be said though that owing to its incredibly basic functionality, it would be better described as an audio editor.

Operating Systems That Audacity Is Compatible With

One of the perks to Audacity is that it is compatible with Windows, Linux, and macOS; making it cross-platform. So regardless of your operating system, you will be able to download it and get started right away. If you haven’t already, click on the relevant download link below to get started; it is 100% free.

Some Alternatives To Audacity

As you’ve probably realized by now, Audacity is a useful sound editor if you are simply looking to cut and splice a few tracks together, perhaps to make yourself a playlist of songs or you are just starting out in the world of music production.

But, if you are looking to produce songs that you ultimately want to sell or are on the path of becoming a professional producer, you may be better off looking at some other, more elaborate software. Below is a list of purchasable alternatives to Audacity, linked to where you can buy them.

The Origins Of Audacity

Audacity is a great piece of software for beginners and those who are just dipping their toes in the sea of music production. It was created back in 1999 by a pair of individuals, namely Dominic Mazzoni and Roger Danneberg, while they were still at University, and released in 2000, as open-source software.

Some Down Sides To Audacity

Audacity is, strictly speaking, audio editing software which is free of charge and cross-platform. It is not a fully-fledged DAW and therefore its capabilities to help you make music are not as great as its purchasable counterparts. However, the program is not without merit and there are many features to it that are immensely useful. The program allows you to do all the basics of music creation, from recording to editing and ultimately bouncing your track.

You can also use it to make beats completely from scratch, but this means that you need a good knowledge of instrument frequencies in order to create a piece using the built-in instruments. You will also need a lot more time and patience when creating music in Audacity, as opposed to other DAW programs.

So if you are a complete beginner to music production, someone who simply needs to cut and splice tracks for personal use, or you are working on a shoestring budget, then you should be able to have your requirements met by Audacity.